This eye-catching beetroot pizza is easy to make and uses every bit of a bunch of fresh beetroots: from stem to leaf. The roots are roasted and then pureed before being added to the pizza dough, while the leaves are whizzed into a tangy pesto. Chopped bright purple beetroot stems add another shock of colour to the pizza, as well as a lovely texture. The flavours of this pizza all come together with rich, salty goat’s cheese and a crown of peppery rocket. With capers and olives, the flavours of this pizza are as intense as the colour. 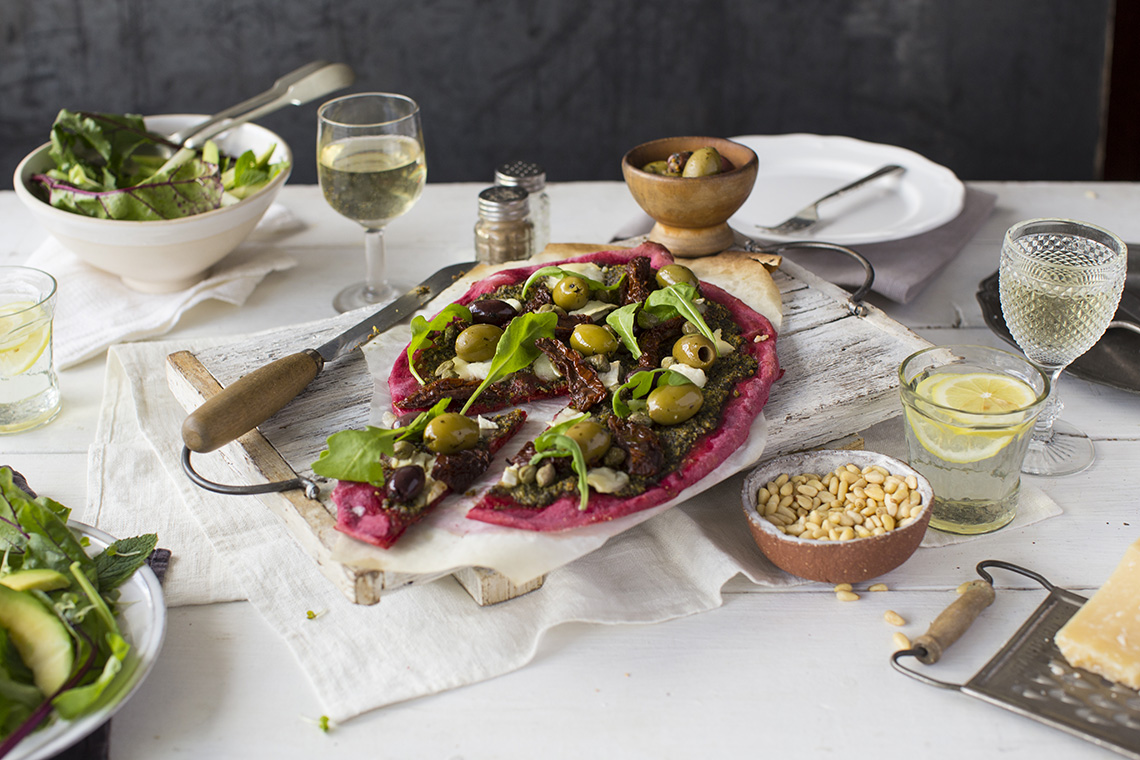 Cut the beetroot stems from the roots, leaving an inch of stem still attached. Reserve the beet leaves and stems. Wash the beetroots and wrap in foil individually. Place on a baking tray and cook in the oven for 30-40 minutes or until soft. Allow to cool slightly, then rub off the skins with a paper towel. Puree the beetroot in a food processor and set aside. You will need 150g (½ cup) of the beetroot puree.

To make the pizza dough in a stand mixer:

Pour the water into the bowl of the stand mixer. Sprinkle the yeast over the water, and let it stand for a few minutes until the yeast has dissolved. Insert the dough hook, add 150g (½ cup) of the pureed beetroot, plus the flour and salt to the yeast water and knead with the machine for a few minutes until the dough forms a sticky ball. It will be a very soft dough, but if the dough is still too sticky, add a tablespoon of flour at a time until it is manageable. Don’t add too much or it will affect the end result.

To make the pizza by hand:

Pour the water into a large mixing bowl. Sprinkle the yeast over the water, and let it stand for a few minutes until the yeast has dissolved. Add 150g (½ cup) of the pureed beetroot, plus the flour and salt into the bowl of water and stir until it forms a loose dough. Tip the dough onto a lightly floured countertop (on floured baking paper if you have a wooden countertop to avoid the beetroot staining) and knead firmly for 5-10 minutes or until it’s smooth, though it will be a soft, sticky dough. If the dough is too sticky, add a tablespoon of flour at a time until it is manageable. Don’t add too much or it will affect the end result.

Put the dough into a large lightly oiled bowl, turn the dough so both sides are covered with oil and cover tightly with clingfilm. Allow the dough to rise for 1 ½ hours in a warm place.

Meanwhile, make the beet leaf pesto. Separate the beet leaves from the long pink stems and wash both. Set the beet stems aside. Remove any large pink stems that run through the leaves and discard. Add the beet leaves as well as the other ingredients, except for the olive oil, to a food processor and blitz until fine. While the motor is running, add the olive oil slowly until it becomes thick. Keep in the fridge until ready to use. When you’re ready to cook the pizza, preheat the oven to 250C/ 480F, or as high as your oven will go.

Divide the dough into thirds, then on a lightly floured piece of baking paper, roll out one of the pieces as thin as possible to fit the size of your baking tray. Transfer the pizza and baking paper to the baking tray.

Place the pizza in the oven and cook for 10-12 minutes or until the base is crisp and the edges have begun to brown.

Repeat with the remaining dough and toppings.

Pile the hot pizzas with the rocket/arugula and serve hot, cut into slices.

This aesthetically pleasing dish can be cooked to perfection on a Leisure range cooker. Select from many designs and styles, take a look at our collection of 100cm range cookers, cream range cookers and gas range cookers. 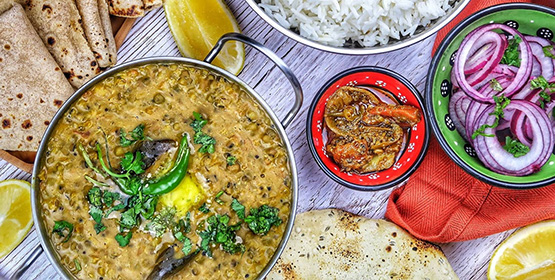 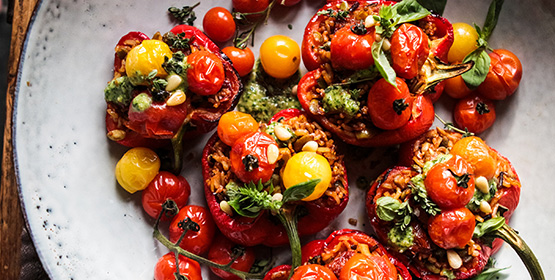 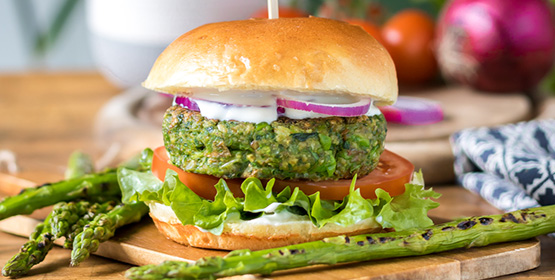 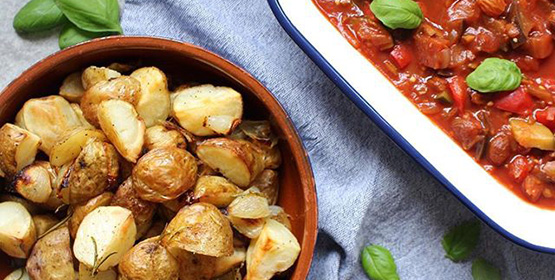 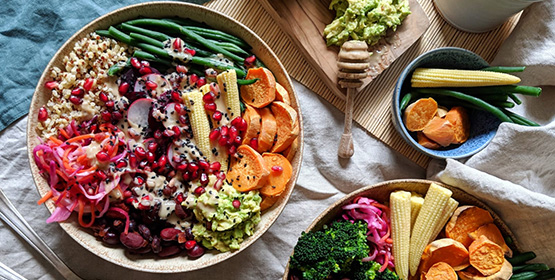 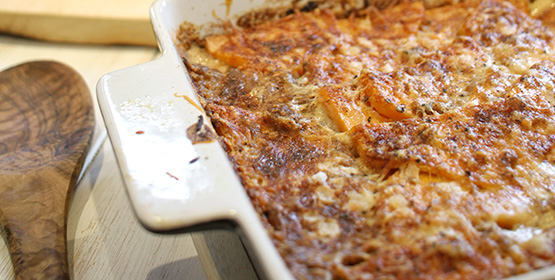 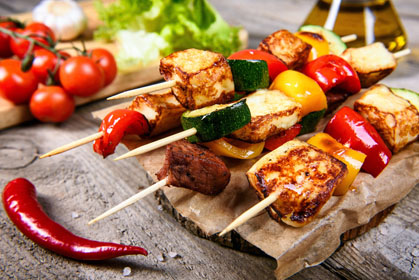 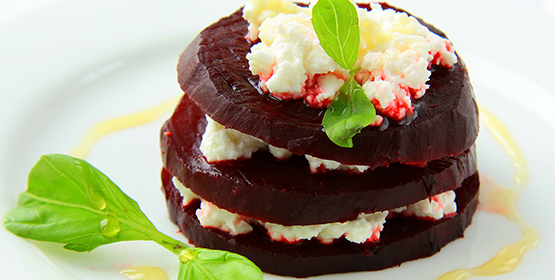 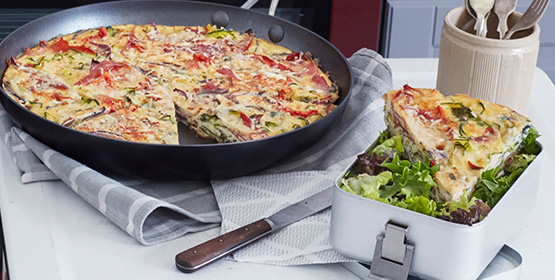 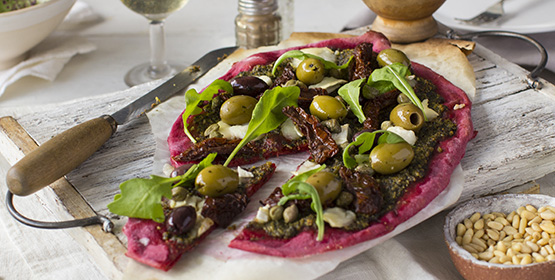 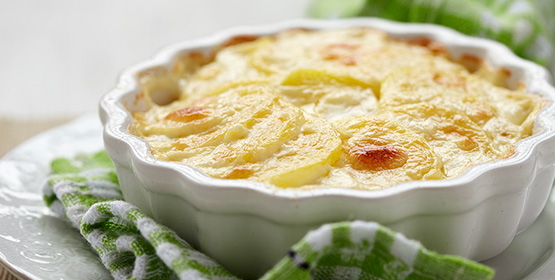 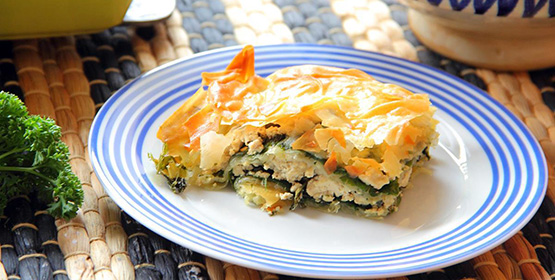 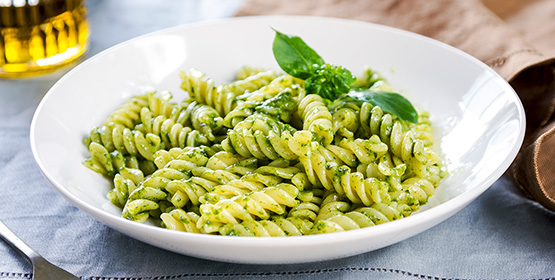 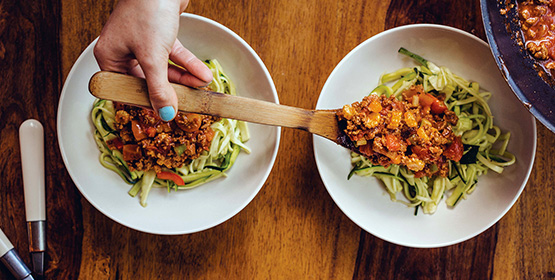 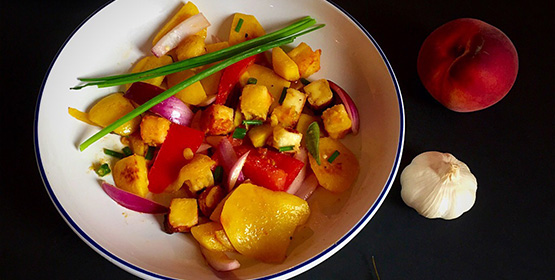 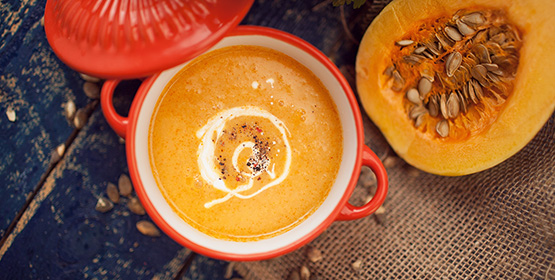 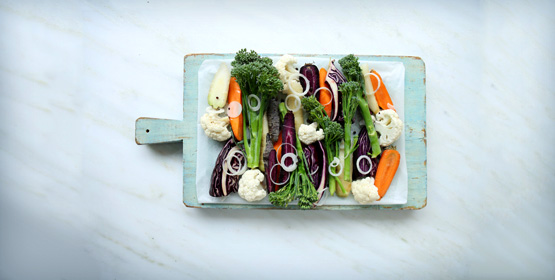